Last weekend, X-Men: Apocalypse came out in theatres to some seriously mixed reviews. I sit in the camp that was pleasantly surprised by the film and enjoyed the crap out of it. In the wake of my Apocalypse viewing, I read several articles and pieces about the film and generally just perused some of the fun stuff out there about it. I wrote down several of the things that I found really neat about X-Men: Apocalypse and thought I would share them.

As many of us know, Stan Lee makes a cameo in pretty much every Marvel movie. There are exceptions, such as the Blade films and several of the X movies but he’s in more of them than not. In X-Men: Apocalypse, Stan Lee’s cameo is alongside his real-life wife, Joan B. Lee who you may remember as the voice of Madame Web in the Spider-Man TV series and Miss Forces in the Fantastic Four TV series.

Oscar Isaac is criminally underused in X-Men: Apocalypse. Sure, he has a lot of time on screen but he could’ve been replaced with a sexy lamp (as Kelly Sue DeConnick would say) and it would’ve gotten the job done. That being said, A-listers Tom Hardy and Idris Elba were both considered for the role of En Sabah Nur aka Apocalypse, which – by the way – is a name that the character is never ACTUALLY called in the film.

James McAvoy plays a young Charles Xavier in the “First Class” series of X-Men films and despite the fact that Patrick Stewart isn’t in Apocalypse, the wheelchair that McAvoy uses is the same one that Stewart used in X-Men (2000).

Speaking of Patrick Stewart, he jokingly informed Bryan Singer that should Jennifer Lawrence “start playing up”, he would be willing to play Mystique in the film(s), “I am so ready to be naked, painted blue, and the world is ready for it too” he said. We are, Mr. Stewart. We really, really are. With a rumoured film revolving around Mystique maybe in the works, maybe J-Law would kindly back out of the role so that we could get the opportunity to see this happen for real.

En Sabah Nur, again aka Apocalypse, made his first live-action appearance with this film. The date of the film’s release coincides with the 30th anniversary of the character’s first appearance in the X-Men comics back in May of 1986. Happy belated birthday, Apocalypse!

This year is also a big anniversary year for the Star Trek franchise as it turns 50. During X-Men: Apocalypse, En Sabah Nur uses Storm’s TV set to absorb years and years of knowledge and find out about the state of the world. Before the TV show flickers to a series of news segments and the like, the show that’s playing is Star Trek. The episode is Who Mourns for Adonais (1967) which mirrors the story of Apocalypse in that a superior powered being acts as a God and tries to control mortal men.

We heard rumours that the X-Men character Dazzler would be making an appearance in the film. Tuesday Knight even ran an unsuccessful campaign to try to get the studio to cast her as the character. While Dazzler didn’t make it to the final cut of the film in any form, we do know that an easter egg will be included in the deleted scenes featuring Scott Summers and Jean Grey in a record shop together as they come across Dazzler’s album.

This is the first film to feature all of the “blue mutants” in major roles. We get Mystique, Beast, and Nightcrawler all together making Eiffel 65 and Tobias Funke proud. TECHNICALLY all of these characters also appear in X2, however, Dr. Hank McCoy makes said appearance outside of his “blue” Beast form. 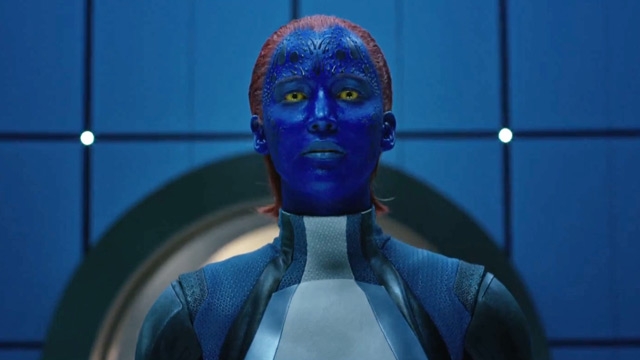 There’s quite a bit of crossover between the X-Men films and other big geek franchises. The X films picked up their third actor from the Star Wars universe with Oscar Isaac, who plays dreamy rebel pilot, Poe Dameron in The Force Awakens. Before that, X-Men featured Ray Park as Toad (he played Darth Maul in The Phantom Menace) and Rose Byrne as Moira McTaggart (she played Dorme in Attack of the Clones).

Additionally, the X franchise has started collecting actors and actresses from Game of Thrones starting with Peter Dinklage in Days of Future Past and following with Sophie Turner in Apocalypse as young Jean Grey.

It’s the month of METAL MUSIC here on Rogues Portal (see our latest Mix Tape column) so it’s appropriate to note that the song that’s playing while Apocalypse recruits Angel is Metallica’s “The Four Horsemen” from the album “Kill ‘Em All” which was released in the same year that film takes place (1983).

And finally, X-Men: Apocalypse takes place in a reset timeline – a different timeline than the other X films exist in. In the comic books, the Age of Apocalypse storyline affected the Marvel Universe in a big way and resulted in the deaths of many prominent characters like Peter Parker, Frank Castle, Carol Danvers, Sue Storm, Ben Grimm, Thor, Namor, Clint Barton and more. In both the Marvel and DC universes’, alternate reality Earth’s are given a number. The Age of Apocalypse alternate reality is known as Earth-295. I love comic books and even I get confused about this stuff. It’s cool but also kiiiiiinda ridiculous, like comic books as a whole, I suppose.

I hope you enjoyed these tidbits about X-Men: Apocalypse; the movie, the comics and the cast. Stay tuned to Rogues Portal for more of these in the future.

Welsh Films You Need to Watch!