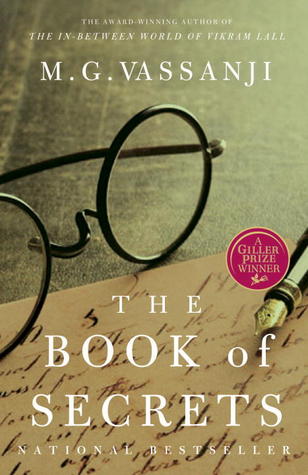 Vassanji’s multigenerational story in Tanzania in the first half of the twentieth century was the first book to win the Giller prize in its inaugural year in 1994.

“In 1988, a retired schoolteacher named Pius Fernandes receives an old diary found in the back room of an East African shop. Written in 1913 by a British colonial administrator, the diary captivates Fernandes, who begins to research the coded history he encounters in its terse, laconic entries. What he uncovers is a story of forbidden liaisons and simmering vengeances, family secrets and cultural exiles–a story that leads him on an investigative journey through his own past and Africa’s.”

Roisin: Okay girl, I know you are a Vassanji fan but this one was not for me. I felt like there was maybe a really good book in here somewhere but every time it hinted at something interesting or exciting, the narrator veered off towards something far less exciting, or a very succinct conclusion to complex problems and situations.

At the heart of this book are the women in the story, but unfortunately we only seem to see them out of the corner of our eye while reading. They are mostly shown in hazy memories or as motivations for male characters’ actions instead of having their motivations explored or explained. They seem to move the plot along but never get any introspection or character growth because of it (not that we see anyway).

Kathleen: I am not a Vassanji fan either after this one! I really enjoyed “Nostalgia,” which we’d read for Canada Reads, but this book really missed the mark for me. I was bored with this whole novel – it actually put me to sleep every time I tried to read it, so it took me ages to get through. The story jumped around a lot, and the character development wasn’t very good, so none of them were particularly memorable. It made the book hard for me to follow in some places. You’re right about it veering off from interesting things! I also felt like we’d just be getting to know a character when they’d disappear for ages. There were also new characters being introduced all the time, because the novel spans several generations, but I did find it a bit overwhelming to keep track. Also, the beginning of the book is also told through the writings of a British colonizer, which I really disliked, but that did change!

The ending of the book leaves a lot of questions unanswered, but by the time I got to the end I didn’t really care.

Roisin: I love historical fiction and really enjoyed this book as a view to a place and time period I haven’t encountered in fiction before. The atmosphere of Dar es Salaam that the book describes is immersive in the second half of the novel. Unfortunately this book aims for sweeping epic at some parts and intimate family drama at others but doesn’t seem to quite nail either. However, it was a quick read so I don’t know if I would put it on the 30 before 30 list but I would definitely recommend it for 20th century historical fiction fans.

Kathleen: I wouldn’t recommend this one! But, having said that, I will be giving Vassanji another try.

What’s New This Week in Books