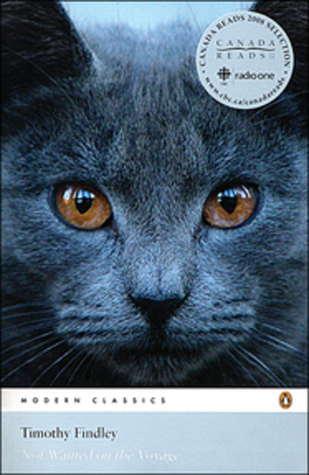 This week we’re going back in time to some totally true history, aka the Bible. Timothy Findley is best known for his popular novel The Wars, which is not the one that appears on our list, dear reader.

Not Wanted on the Voyage is the story of the great flood and the first time the world ended, filled with an extraordinary cast of remarkable characters. With pathos and pageantry, desperation and hope, magic and mythology, this acclaimed novel weaves its unforgettable spell.

Roisin: First thing’s first: Kathleen sent me a second hand copy of this and it had an actual historical artifact in it: a coat check ticket from Electric Circus.

This is one that I remember seeing on the list and thinking, didn’t I read that in high school? Then I started reading it and nothing was familiar so I’m guessing I did not!

Anyone who knows me well will tell you that I love fan fiction of the bible (which is totally normal) so I was on board for this one! (Geddit?) However, for me the experienced was mixed. Some of the symbolism was too heavy which should be fine when we’re talking about the source material, but it came across as jarring alongside some of the gentler elements like Mrs Noyes and Emma’s POV sections.

Kathleen: My second-hand copy had loads of notes in it, but most of them were literally just repeating things that Findley had written, verbatim.

So. I fucking hated this book. I’m not sure why Findley decided to write it but the whole thing felt like a massive, unnecessary waste of his time. I was enraged every time I was reading or thinking about it (still am!). NO ONE SHOULD BE RECOMMENDED THIS BOOK.

I completely agree with you about the jarring sections, too! There were a couple of moments that were a little bit light-hearted in the novel that were completely out of place for me.

Stupidly, one of the parts that annoyed me the most about this book was when Noah decided to spend hours doing magic tricks right in front of everyone’s face after a dinner party. I somehow got into a conversation with a friend of mine not 3 days ago about how terrible it would be to have sex with a magician because they’re just the worst kind of people and all my opinions were 100% justified SORRY MAGICIANS I DON’T HAVE TIME FOR YOUR NONSENSE.

Roisin: Girl was he a magician? I only remember Noah using “magic” to describe things he wanted to exclude his wife and stupid sons from.

Anyway this is a book about terrible people and the terrible things that happen to them because of their terrible decisions and I really respect that follow through. I didn’t love it and I can’t fully recommend a book with the sexual violence that this one has but I also didn’t hate it as much as you did.

Kathleen: Oh girl I meant like, a shitty party magician. He spent many pages being like, “hey, God, you like this? Gonna pull some nonsense out of my hat, are you into this? Look at this penny? See this penny? Now you can’t!” Not someone who does real magic, because he is too shitty for real magic.

One of the review snippets on the cover of this book said is was humourous, and I really want to know what book they read, because it for sure was not Not Wanted on the Voyage.

Lets all just read Many Waters by Madeleine L’Engle instead, that’s some good bible times!

Also, side note: This is the first time I have given a book a one-star review on Goodreads. Normally, if I hate a book, I still give it 3 stars because the author wrote a lot of words! That was probably hard work! But no way, Timothy Findley, you don’t deserve my pity stars.

Roisin: This one is kind of in the middle for me. I respect it’s place in the Can Con Canon (lol) but we’ve read so many better books that it’s a soft no from me.

Kathleen: I respect that you said Can Con Canon, but it’s still a DEFINITE NO.

NEXT WEEK’S BOOK: Anne of Green Gables by L.M. Montgomery

Scooby Dos or Scooby Don’ts Mystery 2: Hassle in the Castle

Amelia Cole and the Interview with Adam P. Knave

100 Thoughts On The 100: Survival, Spectacle, and Our Worst Impulses