Yesterday I had the pleasure of being a part Toronto Fan Days, a one-day, one-off show for the holidays and for giving fans an opportunity to have all the geeky things in one room (part of the FanExpo family). Plus it brought together local creators to sell and sign products and allowed for attendees to have even cooler gifts for their friends and family.

The show was small in comparison to the other shows that are sprinkled throughout the year at the Metro Toronto Convention Center. It took up probably a pinky nail equivalent of what it would normally be but the room was still packed with exhibitors selling comics, toys, clothing and other merch and artists galore.

Adam Gorham who is launching his new Image book, The Violent with Ed Brisson this week was there to offer a sneak preview and to give out advanced copies.

Fred Kennedy and Miko Maciaszek had copies of The Fourth Planet for sale and other awesome things. 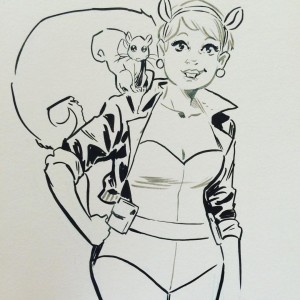 Michael Walsh took commissions and happened to be my next-door table buddy. He did the loveliest Lady Lovely Locks for Hope Nicholson and the best ever Squirrel Girl for me. He’s super prolific at drawing rodents now, FYI.

Hope Nicholson invited me to be at the show to sign brand-new, freshly launched copies of The Secret Loves of Geek Girls. It was incredible to see the book in real life and to have it do so well in its first weekend out in public. Lots of people wanted to know all about it and lots of people picked it up. I signed a bunch (sorry to the people that I wrote lame jokes and comments for… YOU PUT ME ON THE SPOT!) and just had a blast enjoying the reception for it. 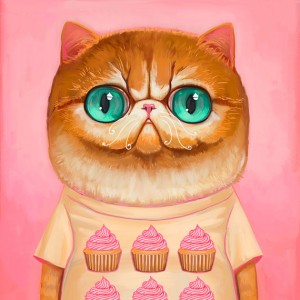 A big treat for me outside of the book launch was getting to see a couple of my friends from before I was working in comics at the show. Not just AT the show but tabling there and doing extremely well. I’ve kept in touch with Adam Gorham but him and I go way back along with an artist named Melanie Schultz. Melanie was someone who really taught me to accept geekdom into my life and encouraged me to draw and love comics, which I am forever grateful for. Back then, she barely showed anyone her art and now I’m practically weepy to see that she’s not only showing people her art but selling it and doing really well. She has a kind of Tara McPherson style to her work but with her very own unique flare. She’d probably be mortified that I’m writing about her, but also maybe not. YOU’RE SUPER TALENTED, MELLY. You should check out her Etsy stuff.

Anyways, being at the convention this weekend was a fun reminder to keep doing what I’m doing. I love this industry and being a part of it. The other Secret Loves contributors that showed up to sign were amazing and in addition to being happy to just be a part of the book, I’m happy that I’m in it with such incredible women.

And look at these reviews from some of the guests at the show:

"I wish I was born a lady so I could've contributed to this brilliant piece of literature!" –@Fearless_Fred pic.twitter.com/0lRwMFOeDa