A review by Cameron Kieffer

I initially missed the beginning of this episode.  I came in during the obligatory Star Date monologue that has opened nearly every episode of every Trek series to date.  The only thing that caught me off-guard was the lack of any opening titles by the next commercial break.  That first post-title scene just seemed so… very much like Star Trek that it sucked me in right away.  Once I realized my error, I went back to the beginning and was delighted by what I saw.  I’ll give you a hint: there were Klingons.

Now, I’m a Trek fan of old. This is the fifth series to premiere during my lifetime, and it’s been far too long since I’ve had one to look forward to. Sure, the newer movies are pretty great, but they’re not the same. Star Trek: The Next Generation was my introduction to the franchise and is the standard by which all future Treks are judged. And while this first episode is quite a departure from TNG, it shows a lot of promise and looks to be taking the franchise in a new, yet familiar direction.

After a clever cold open, we are introduced to the crew of the USS Shenzhou, most notably Captain Georgiou (Michelle Yeoh) and First Officer Michael Burnham (Sonequa Martin-Green).  Right away we have a call-back to both TNG and TOS (The Original Series) with Capt Georgiou referring to Burnham as “Number One.”  The dynamic between the two is a lot of fun to watch and refreshing after all the reboots and origins we’ve seen lately.  For once it’s nice to see characters interacting with familiarity rather than meeting for the first time. 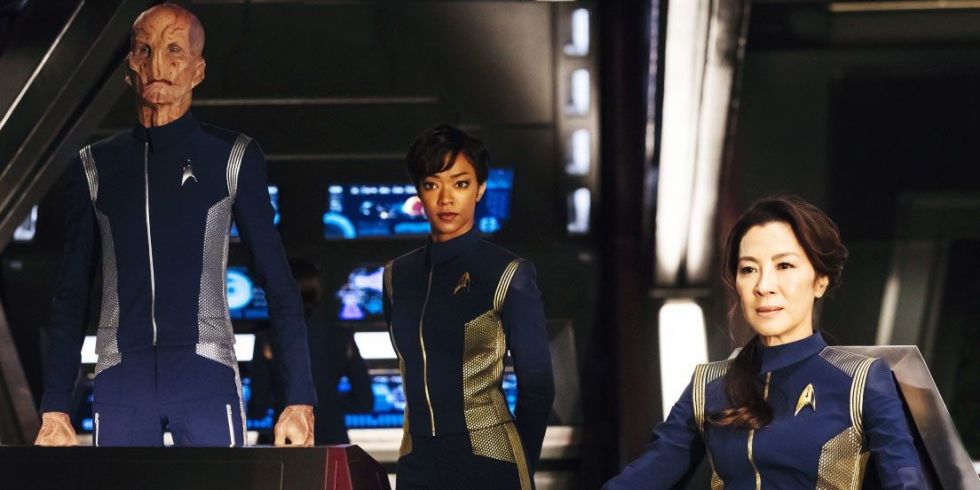 This also extends to Lieutenant Commander Saru (Doug Jones), the ship’s Science Officer and the only other crewmember with any real personality at this point. Saru is a member of the Keplien, an alien race with no food chain. The race is hunted as prey, giving them the ability to sense when death is coming. Burnham has an uneasy, almost antagonistic relationship with Saru, which is a sharp contrast to that of her relationship with her captain. The remaining crew members are mostly scenery and contribute nothing to the narrative. Although, I did appreciate the helmsman providing an amusing “this is your captain speaking” speech to the crew. He even describes the weather outside the ship.  Brilliant.

In spite of the humor and lighthearted tone, there’s some darkness to be found. The Klingons in particular, are scary as hell. And the last scene of the episode shifts the status quo considerably. Threatening to destroy the primary relationship we’ve become invested in.  It’s an exciting development that is quickly diminished by an abrupt cliffhanger ending. And there’s my main issue – this should have been a two-hour premiere. Instead, it ends at the half-way point before we even meet the rest of the crew. Jason Isaacs is apparently on the show but you never see him, nor do we even see the titular ship. It’s all the more frustrating when you realize the only way to see the next episode is to subscribe to yet another streaming service. Thanks, CBS.

The episode poses a lot of unanswered questions. Rather than hinting at larger mysteries and character reveals, it just sort of glosses over certain things. Take our lead character for instance: her first name is Michael. Seems like an odd choice without some sort-of clarification: Is she named after her father? Is she trans perhaps? The latter would be pretty significant but definitely fits in line with the franchise’s history of acknowledging and celebrating diversity.

Stranger still is the fact that she has ties to Vulcan and, in particular, Sarek (aka Spock’s daddy). How this relationship came about and why is definitely something that needs addressing.  Another downside to the show is that it’s yet another prequel to the original series. Including Enterprise and JJ Abrams’ 2009 reboot, it seems everyone is fascinated by the pre-Kirk & Spock era. Is it too much to ask for a series that takes place in the future OF the future? If this trend continues, the next series is going to take place five years into our future and who wants that? 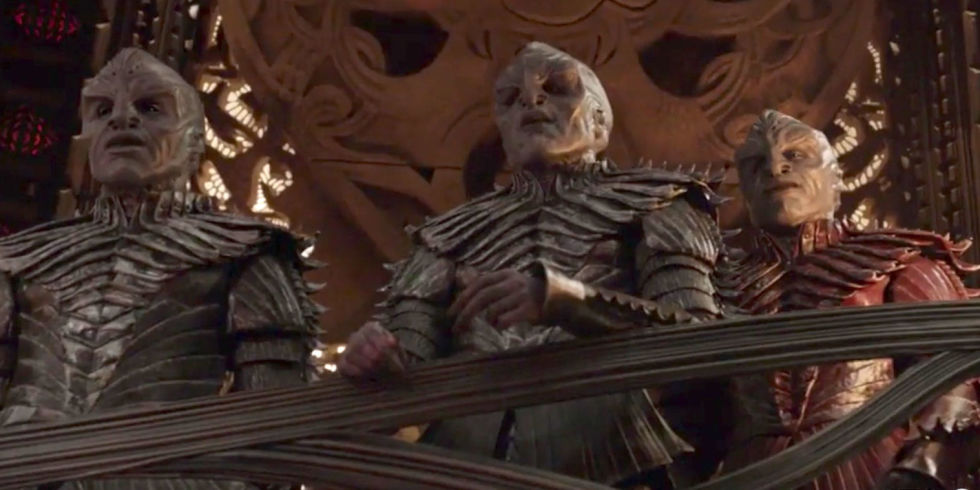 Back to the positives: the production values are incredible. The visual effects are motion picture-quality, giving it the look and feel of the recent films.  The make-up effects are also spectacular. The Klingon’s ridged brows and noses are even more pronounced, and they’re even more intimidating with the complete lack of hair.  They’re like a cross between the Uruk-Hai from Lord of the RIngs and Louis Gosset Jr’s character from Enemy Mine.

The costumes are top-notch as well. The Starfleet uniforms are closer to those seen in Enterprise, which makes sense given that this series takes place soon after. The Klingon uniforms are surprisingly bright and appear like chainmail. You definitely get the sense that these guys are warriors just waiting for an excuse to cut loose.  The set design is superb, with the bridge of the Shenzhou using a layout nearly identical to the original Enterprise.  The show is just very, very pretty.

Watch it!  Despite the short run-time and narrative missteps (not to mention the accessibility issues), there is a lot to enjoy in this first episode of Star Trek: Discovery.  The characters are enjoyable, though it would be nice to see more of them than just the main three.  It’s a great set-up that has enormous potential and is the most engaging Trek series since Deep Space 9.  I’ll definitely be taking advantage of the free 7-day trial to check out Part 2 next week, and I encourage you to do the same. In other words, “make it so.”

Cameron Kieffer
cameron.kieffer@gmail.com
Cameron Kieffer wears many hats. He is a freelance writer and artist, creator of the webcomic "Geek Theory" and is co-host of the Nerd Dump podcast. He lives in Topeka with his wife and increasingly growing comic book collection.