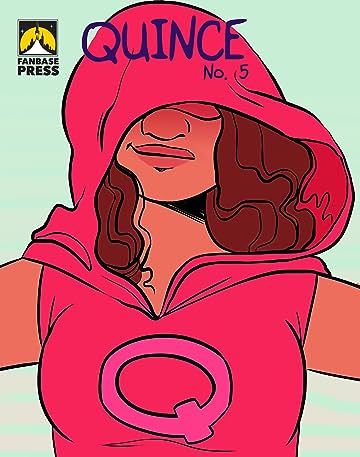 In Quince #5, summer is officially over. Lupe is starting sophomore year—same school, same friends, but a brand-new 15 year old, super-power wielding Lupe. Only Lupe herself doesn’t find her superpowers so incredible. The powers that she hasn’t had any use for yet, combined with a wedgie-inducing suit leaves her quite annoyed at what her quinceañera brought her. So what’s a girl to do? Well, pray for a disaster that requires her to use her superpowers of course. Insert “Hot Devin” who slips while hanging a banner at school. Lupe to the rescue!

As with the previous issues, the writing in Quince #5 is believable and flows smoothly. It is cheerful and humorous, but it has a whole lot of heart as a coming of age story. Similarly, the art is bright and youthful, but it maintains a depth and poignant quality. With this issue, I really liked all of the close-up panels, something we haven’t seen as much in the previous issues. The solid, simple backgrounds with the close-ups of characters really pulls readers into the story, and that has made me care about Lupe’s story from issue #1.

There are plenty of superhero coming-of-age stories, but Lupe’s narrative is refreshingly unique. Getting superpowers doesn’t make her a supermodel with a ridiculously high IQ and an entry into the popular clique at school. Being a superhero is hard, and sometimes boring, and Quince #5 captures this beautifully. Immediately from the cover of Quince #5, with Quince in her power pose, smirking, with her hood falling over her eyes, it is impossible not to be interested in where she goes next.

The Verdict
Buy it! Quince #5 continues the 15-issue series about a Latina girl with superpowers for a year, and in this issue Lupe makes her first heroic act. Check out ComiXology the 15th of every month for a new issue (available in both English and Spanish).

Archie Comics x Threadless team up to bring Riverdale to you!

The Legend of Zelda Encyclopedia Review