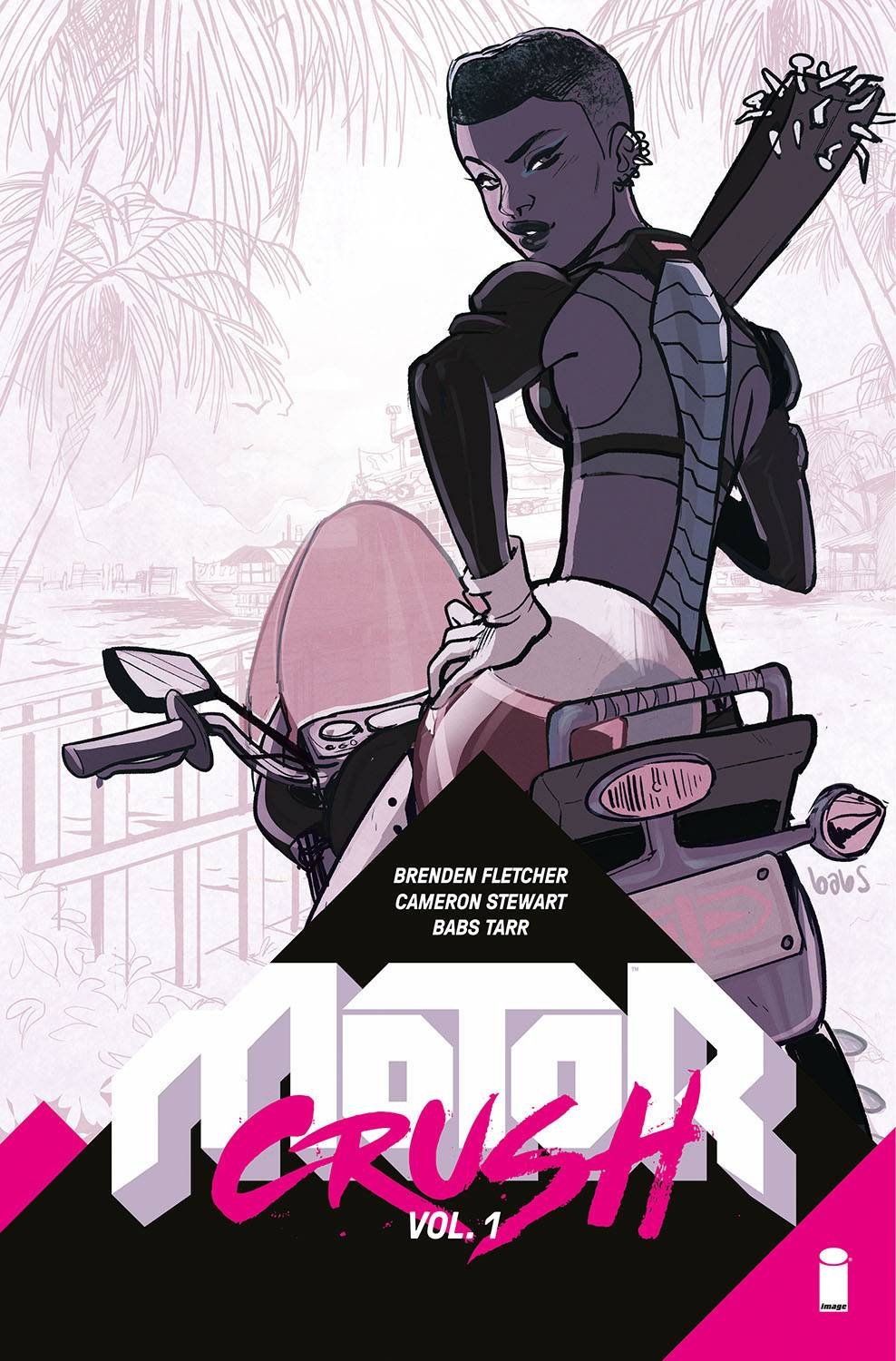 Comic books are generally sold on the strength of their creative team, and that’s especially true for creator-owned works. While an established IP or licensed characters can carry sales for a while, totally original concepts need all the help they can get, and an acclaimed writer-artist team is crucial in marketing them to readers.

While the premise of Motor Crush is appealing enough on its own, the team behind DC’s “Batgirl of Burnside” revamp —Brenden Fletcher, Cameron Stewart, and Babs Tarr— are crucially responsible for lots of the attention this title has been getting since it launched last December.

On Batgirl, they were pure lightning in a bottle; precisely the right configuration of people collaborating on a shared vision. While their run on that title only lasted fifteen issues, they clearly recognized a good thing at some point during the creative process and stuck together to produce Motor Crush.

Set in a sunny Nova, Rio-adjacent locale at some point in the future, Domino Swift is a competitive cyclist who partakes in professional races, hoping to get sponsored ASAP. To help pay the bills, she’s agreed to let a floating camera bot capture her every move vlog-style, but both Domino and her adoptive father know she’s got what it takes to climb the ladder in racing.

There’s just a slight problem: Domino dopes her bike with Crush, a illegal performance-boosting  “machine narcotic.” To get the stuff, she partakes in an underground racing-melee circuit at night, risking her fledgling career each and every time. When she gets caught up in Nova’s crime scene after ill-fated race, things get… weird.

Without divulging details of the first arc as a whole (which concludes this week with issue #5), Motor Crush is exactly the kind of book FST —that’s what I’m calling them, because it’s quicker to type— should’ve followed up Batgirl with. In the span of five issues, they’ve fleshed out a world that’s familiar to ours, but weird enough so that it doesn’t “feel” like current times. If you want a snappy summation of the book’s vibe, “cyber-motorpunk” just about does it.

Part of that is down to the writing and script, with memorable characters and ideas spread throughout, but man — Babs Tarr’s art is insane. Having seemingly come out of nowhere with Batgirl, she proves her mettle as a sequential illustrator here. Everything is so vibrant, colorful, dynamic… just an absolute treat to look at. While I would’ve gladly taken more issues of Batgirl drawn by Tarr, I’m just glad there’s a new outlet for her to go wild on.

You can’t talk about art without mentioning the lettering, and Aditya Bidikar holds up his end here to great effect. An action-packed book like Motor Crush requires frenetic lettering (especially with sound effects), and Bidikar’s work perfectly compliments Tarr’s illustrations.

It also makes Fletcher and Stewart’s script easy to read, and visually appealing too: notably, flourishes to convey technology (e.g. the lens of Domino’s camera pest, touchscreen interfaces) that make Nova feel like a tangible place, even if we’re still a bit away from the world of Motor Crush in reality.

The Verdict
If you couldn’t already tell, I recommend buying Motor Crush. Its first trade paperback is released in June, but you could do worse than catching up with the series digitally before then, or seeking out physical issues in stores. If you want fast-paced, candy-colored cyber-motorpunk, then Motor Crush is the comic for you.

[REVIEW] EVAN’S REMAINS IS A MYSTERY WORTH PLAYING