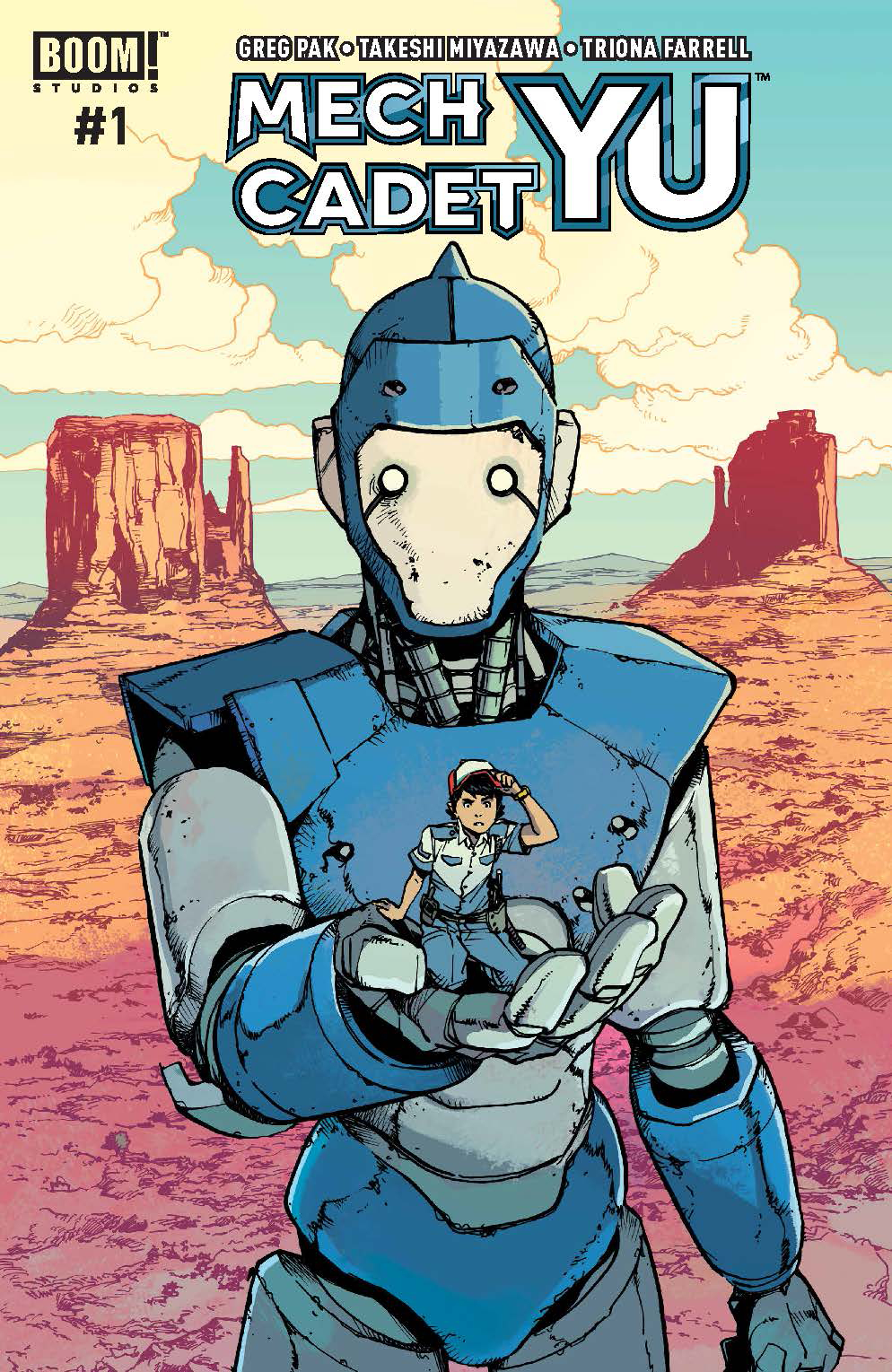 For me, Mech Cadet Yu is a textbook example of how being familiar with a creator’s prior work can get you interested in something you otherwise wouldn’t give a second glance.

Aside from Pacific Rim – which I enjoy a lot – and the Transformers franchise – which I have no interest in – I’ve never really experienced anything in the mech genre. So it would’ve been easy for me to miss Mech Cadet Yu #1, if left to my own devices, but with the combined draw of writer Greg Pak and artist Takeshi Miyazawa I couldn’t not give it a try.

Pak’s done a lot of great work-for-hire and creator-owned stuff in his career. Miyazawa has become a crucial asset to the Ms. Marvel team since he jumped on board a few years ago. They’ve also created Amadeus Cho for Marvel. It’s pretty safe to say they work well together.

In what we can only describe as Pacific Rim-meets-Iron Giant-meets-Starfleet Academy, Mech Cadet Yu #1 introduces us to Stanford Yu, the lowly son of a janitor at a prestigious military school. Every four years, a select few cadets are chosen to pilot alien mechs through mental bonding. A fanboy of mechs himself, Stanford wants to be one of those lucky cadets, but he’s stuck cleaning up their garbage with his mother.

Stanford is a classic Luke Skywalker type; an ordinary kid who wants to be extraordinary. When Stanford comes across a wayward mech who seemingly takes a liking to him, his call to adventure begins – but as he soon learns, there might be some opposition on his path to greatness.

Like many of Pak’s past projects, Mech Cadet Yu #1 is exceedingly sincere in tone. Though he may not be “special”, Stanford is a good kid stuck in an unfavorable situation who is given a once-in-a-lifetime chance to be “special.” In our dark, cynical times, sincerity has almost become a rare commodity. Pak’s sense of optimism lends a warmth to Mech Cadet Yu that’s missing in a lot of other works in the mech genre. And if there’s any artist out there who sells sincerity, it’s Miyazawa.

As mentioned above, his output on Ms. Marvel has been a highlight since he became one of that title’s regular artists, and his aesthetic is a perfect match for Pak’s script. Though set in the United States, Mech Cadet Yu is a very Asian-inspired story, no doubt partly because Pak (who’s Korean-American) & Miyazawa (who’s Canadian-Japanese) share that heritage. The mech genre, of course, has its roots in Japanese anime, while Miyazawa’s illustrations are very manga-esque.

Mech Cadet Yu is also the latest in a string of Pak-written comics (following Totally Awesome Hulk from Marvel and Kingsway West from Dark Horse) that feature an Asian-American lead. Although not explicitly stated, it can be inferred that Stanford is of Chinese descent based on his surname and the fact of his mother speaks Cantonese with him in dialogue. Pak’s continued effort in representing characters of Asian heritage (like himself) is one that should be appreciated.

I haven’t even mentioned colorist Triona Farrell and letterer Simon Bowland, who round out the creative team with quality work. Farrell’s candy colors bolster the inherent sweetness of Miyazawa’s art, while Bowland’s letters convey Pak’s script with clearness and just the right amount of decorative flourishes that make it fun to read.

The Verdict
Even if you’re not totally into the mech genre, Mech Cadet Yu #1 is a promising start from some of the best professionals working in comics today.