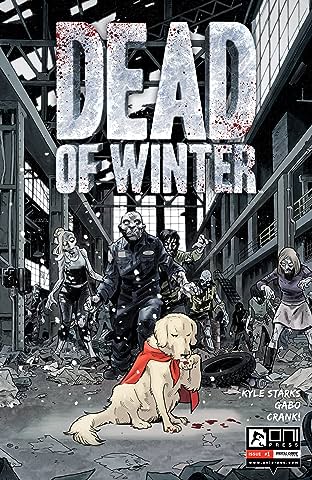 I’ll admit that I am not at all familiar with the tabletop game that Dead of Winter #1 is based on, but when I saw that it combines a zombie apocalypse narrative with a lovable dog named Sparky as the main character, I could not resist.

Sure, a lot of zombie stories often involve animals—especially dogs—but they rarely take center stage as Sparky does here. Before the world became a zombie wasteland, Sparky was a famous TV star—adored by fans and presumably living a life of luxury. Now Sparky spends his days in real life as Sparky the Superdog: annihilating zombies and keeping his companions safe.

Dead of Winter #1 wastes no time dropping readers right into the action, as it presents us a with a family holed up in their house with a whole bunch of zombies milling about their front yard. Lucky for them, Sparky shows up and helps get them to safety: a truck that’s here to take them to a colony of survivors. As one expects from a post-apocalyptic narrative, the colony is made up of an eclectic bunch: a fireman, a lawyer, a police dispatcher, and the resident “white trash”—just to name a few.

Writer Kyle Starks does an excellent job of writing believable dialogue and giving readers a sense of the strong community that this group has fostered, without feeling the need to provide us with a lot of back story. This prevents the comic from feeling dense or over-explanatory. We’re told what we need to know at this point in the story, and I found myself trusting the direction the creative team was taking us in.

The art by Gabriel Bautista is gorgeous—the abundance of gray and muted, shadowy colors elevates the horror and suspense. And the warm, round lines and cartoonish flair that Bautista gives the non-zombie characters makes you instantly care about them and become invested in their survival. In contrast, the zombies are grotesque and limp-limbed, and all seem to have boil-like lesions on their faces. Yes, I don’t know what caused the zombie apocalypse yet, but I appreciate a comic that is confident enough to make readers wait—choosing to drop a few subtle hints here and there, like the boils. And, Sparky, we can’t not talk about Sparky. If you are a dog person, Sparky’s first appearance in the comic on a full page spread with his red cape flying will make you squeal with delight—I’m not exaggerating.

The Verdict
Buy it! As I said, zombies and a kickass dog are more than enough to sell me on checking out a comic. However, when I saw that it was also written by Kyle Starks (read Sexcastle if you haven’t yet!) and illustrated by Gabriel Bautista (The Life After is a gorgeous must-read), I had no doubts that this comic would deliver. Pick up Dead of Winter #1 whether or not you are familiar with the tabletop game—it’s a good boy who hates zombies, how could you resist?