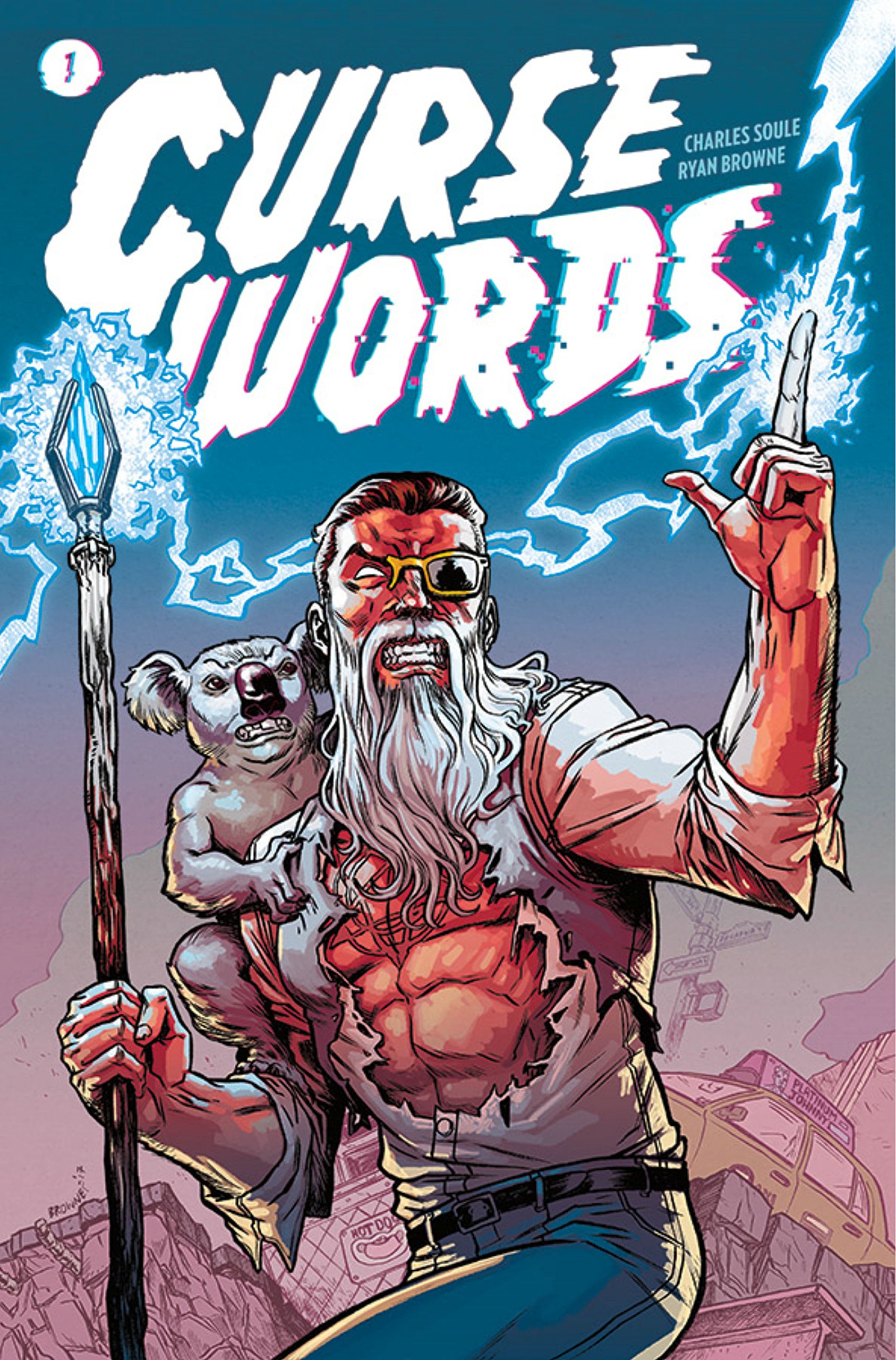 We live in such increasingly weird times lately that I wouldn’t even be surprised if a dark wizard from another dimension just showed up in New York City and started performing cool party tricks to curry our favor and distract us from the destruction he was assigned to bring.

In the meantime, Curse Words Vol. 1(out this week from Image Comics) gives an idea of how that would go down.

Wizord –as you could probably guess from his name– is a mage from another world who came to our planet with nefarious intentions, but accidently found himself enjoying the place enough to keep from dooming it… for now. After giving himself a hipster-fied makeover and opening an office to fulfill magical wishes unto the masses, Wizord soon finds himself caught up in the mess he managed to escape when a familiar threat promises to blow his cover. There’s also the matter of his evil ex-wife, who comes bearing a personal vendetta on his head.

And he’s got a talking sidekick koala, too.

Curse Words Vol. 1 is the latest original project from ultra-prolific writer Charles Soule, who’s quickly made a name for himself in the industry over the past few years through titles like She-Hulk, Letter 44, Death of Wolverine, and the all-new Astonishing X-Men, which also hits shelves this week. How he manages to find the time to write so many books and practice law as an attorney is the real magic trick here.

Soule’s an interesting case (lawyer puns!) in that his best work seems to come from collaborations with artists who can take one of his scripts and turn them into a visual marvel. This was especially true of his run on She-Hulk (with Javier Pulido and Muntsa Vicente) a few years back, as well as his currently ongoing Daredevil (with Ron Garney and Matt Milla). After all, comics are a visual medium, and great art can elevate good material even higher

It’s a testament to Browne’s illustrations in particular that the mix of genres on display (high and urban fantasy) never feel jarring or inconsistent. There’s also a great amount of detail to his art that enriches the world(s) Curse Words Vol. 1 occupies; crowd scenes, for example, never seem half-assed or rushed. He also really sells the humor in Soule’s script (and there’s a lot of it) through facial expressions and comedic timing.

Browne and Garland’s coloring is another highlight of the book. When you’re selling a story about magic and wizards, a diverse color palette is essential. In the five issues collected here, they run the entire spectrum of hues; some scenes are bathed in warm yellows and blood reds, others in neon blues and hot pinks, but it never reads as overwhelming or headache-inducing.

Letterer Chris Crank’s contributions here are incredibly notable, too. I don’t think I can emphasize how much quality caps-lock LETTERING there is in this book! In one page alone, we get incredible renderings of ZGGGT!, SHATOOM!, and WOOSH! which I believe speaks for itself. Outside of the funner flourishes, though, Crank’s lettering work throughout is good. Everything Is legible, easy to follow, and conveys Soule’s script as intended.

The Verdict
If you like your magical adventures less Harry Potter and more Big Trouble in Little China, you can’t go wrong with Curse Words Vol. 1.

How to Improve Your Gaming Skills