Bug! The Adventures of Forager #1 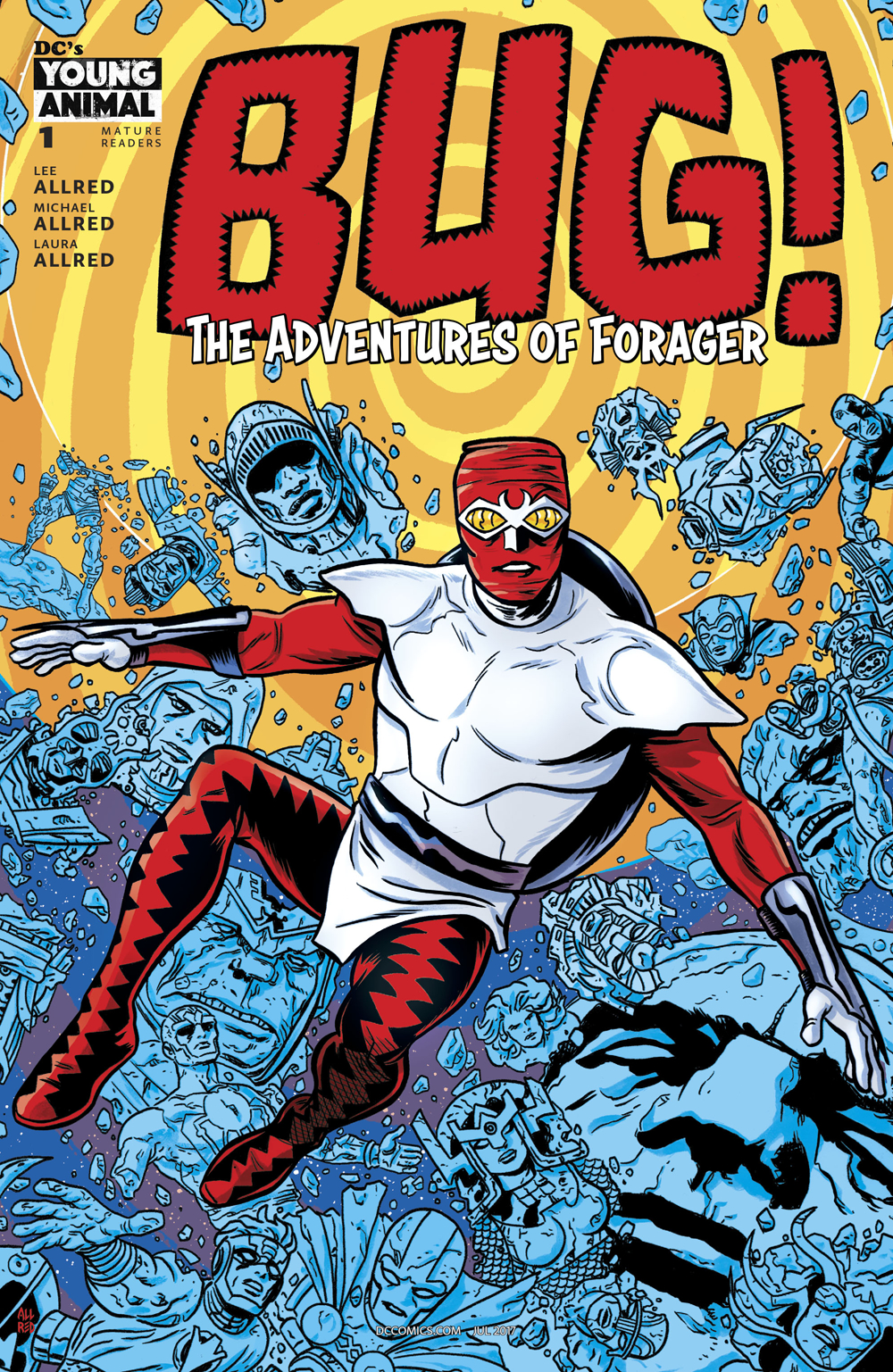 I was gonna make a certain Zoolander gag to open this review, but figured it’s less applicable to this character than certain others. Oh well…

In any event, Bug! The Adventures of Forager #1 is the latest project from My Chemical Romance frontman Gerard Way’s Young Animal imprint at DC Comics, featuring titular character Bug / Forager and other concepts from Jack Kirby’s “Fourth World” stories.

The first instalment of six total, Bug! features our eponymous superhero as he gets tied up into a nefarious plot by General Electric, one of the first supervillains Kirby created when he started at DC decades ago. Unsurprisingly, as part of Young Animal’s sub-section in the DC Universe, Bug! Is supremely weirder and more offbeat than anything you’d find among DC’s mainline comics — in a good way.

Creatively, Bug! is an Allred Family affair, featuring writer Lee, illustrator Michael (brother of Lee), and colorist Laura (wife of Michael) collaborating on one comic book. Their synchronicity can be felt on each page of this issue, which makes for an thrilling reading experience. Though reverential to Kirby’s sensibilities as a writer-artist, Bug! is equally as original and stands on its own, which is a tough balance to land.

As someone who’s only tangentially aware of the New Gods characters and Fourth World stories, there’s a slight barrier to entry here. Allred’s script conveys the necessary information fine enough, but uninitiated readers might find themselves a little lost in the story regardless — but that’s none of Allred’s fault. As a whole, the Young Animal imprint has (partly) been fixated on deep dives in DCU continuity, so anybody with a passing interest in Bug! probably already has a baseline understanding of where Forager comes from anyway.

While I’m not overly familiar with Lee’s prior work as a writer, I’ve long been a fan of Michael & Laura’s artwork since first reading Matt Fraction’s FF. Their aesthetic has an irresistible pop art feel, with expressive facework, dynamic layouts, and vibrant colors. A throwback title like Bug! Is definitely bolstered by its visuals, and the Allreds are firing on all cylinders here. Their art does a lot of the heavy lifting in Lee’s narrative, encouraging you to keep on, even if you’re not totally sure what’s happening, or why.

Nate Piekos’ lettering is another crucial asset to the Allreds’ storytelling. A character like Forager is rooted in deep, deep mythology, which calls for extensive dialogue and narration. Luckily, Piekos’ lettering never looks cluttered or confusing, which helps you follow the story even if you (like myself) aren’t overly knowledgeable about the New Gods or Fourth World. And since this is an old school-style superhero story, expect plenty of fun onomatopoeias throughout.

Buy It. Featuring especially strong artwork and an intriguing plot, Young Animal’s latest is another winner for DC. While it may leave some scratching their heads, Bug! The Adventures of Forager #1 is worth embarking on, especially if you like your superheroes colorful and weird.