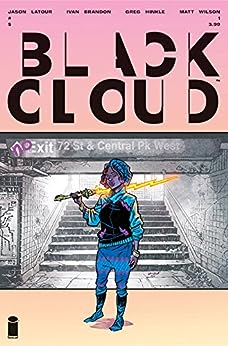 Black Cloud #1 is the start of a promising new fantasy series from Image. Zelda is a girl who was born in a dream world, literally a world of dreams, in which her dreams are remarkably stronger and larger than any other dreams. Alienated from her home, Zelda is now in our world, peddling dreams—selling trips here and there to the highest bidder. In Black Cloud dreams are true, tangible, and capable of having serious, real-world consequences.

Zelda finds that rich kids with too much money and time on their hands are her biggest buyers—exhibit A being the mayor’s son Todd. When the mayor hears of Zelda’s gift, he offers her a position—one with a whole lot of perks, all in return for a seemingly small favor. Zelda is likeable from the first time we meet her, but after she is offered anything in the world and she says waffles, I knew this was a girl after my own heart.

This is an ambitious story about dreams, aspirations, and the art of storytelling. This is not a “light” comic, and yet the team behind Black Cloud was remarkably wise in choosing vibrant, playful art to counterbalance the immensity of the story. This comic has fantastic energy, and Black Cloud #1 does a great job of introducing the main players, the central tensions, and the two worlds. This is a series that tackles huge subject material but manages to give readers enough to hold on to.

The Verdict
Buy it! Comics about storytelling and dreams are not new, but Black Cloud #1 effectively takes these ideas and gifts readers with a unique series about a girl with a dream-travelling gift.  It will be available in your local comic shops Wednesday, April 5th—don’t miss it!